Slayers is officially released! My Unfair Godmother and Slayers give-away and 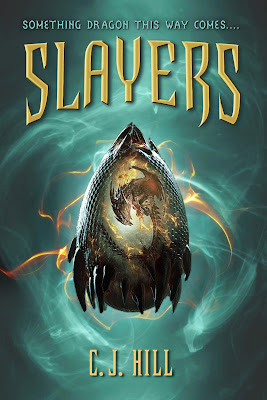 Yes, that magical day that we've all been waiting for is almost upon us. I'll be talking about Slayers at the Hamilton Library in Chandler on the 28th and the book launch will be at Changing Hands on Oct 4.

I just got my author copies of Slayers today and I have to say the cover looks better in real life than it does on all the pictures I've been posting. The gold lettering is shiny. It's oh so spiffy.

To win it or a copy of My Unfair Godmother (which is also chalked full of awesomeness) do the following: (Just realized that's a pun.) 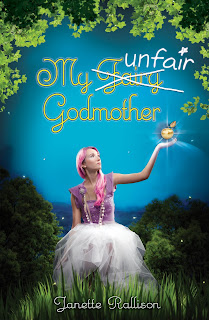 Tansy Miller has always felt that her divorced father has never had enough time for her. But mistakenly getting caught on the wrong side of the law wasn' texactly how she wanted to get his attention. Enter Chrysanthemum "Chrissy" Everstar, Tansy's fairy in shining, er, high heels. Chrissy is only a fair godmother, of course, so Tansy's three wishes don't exactly go according to plan. And if bringing Robin Hood to the twenty-first century isn't bad enough for Tansy, being transported back to the Middle Ages to deal with Rumpelstiltskin certainly is. She'll need the help of her blended family, her wits, and especially the cute police chief 's son to stop the gold-spinning story from spinning wildly out of control. Janette Rallison pulls out all the stops in this fresh, fun-filled follow-up to the popular My Fair Godmother.
Posted by CJ Hill at 10:30 PM

Entry #1: I MUST WIN THESE BOOKS! My unfair godmother has been on reserve at the library for what seems like a decade. *crosses fingers!*

Entry #3: I tagged @JanetteRallison in a tweet about your giveaway from BrookeEthington. I guess I should also admit that I have never before tweeted in my [young adult] life. I broke my silence on Twitter today because that is how much I WANT these books! PICK ME! See you on October 4th :))

I can't wait to get my copy of slayers! I love your books.

Books are always better in person. Though I've always loved that illustration.

I would love to have my own copy of this!

I entry for this book please (for leaving the comment)! :)
Aubrey

And 1 more entry for being a follower of this blog! :)

I am so eager to read your latest book! *sqee!*

I'm a follower and facebooked the giveaway.

Bonnie Gets A Say said...

Congrats! I'm so excited to read it! I'm a follower.

My kids and I can't wait to read the new one! I'm a follower.
bgh@byu.net

I am a follower.

Do we have to choose? Eeek, this might be really hard.

I want to win!

Excited to read your new book!
I am a follower of this blog and I shared this on my book page on Facebook.

Oh! I guess I need to make separate comments.
I am a follower.

Hi count me in! I'm following and off to tweet about it! :)

I'm a follower and hey, look, I'm leaving a comment, too! =) So excited about your new book!

I love that you do this. So much fun. I hope to win one of these books.

Follower, congrats on another great book! And I'm posting on facebook because I'm just that excited about your book!

Yay! So excited!
I'm a follower and I've posted it at http://crazedboutbooks.blogspot.com/2011/09/slayers.html

I'm a follower! I loved My Fair Godmother and I'm dying to read this one!

I am so excited to read this book! I'm going to have to get several copies cause my girls and I will be fighting over who gets to read it first=)

I love this book so much, and I can't wait to get my hands on Slayers!
I'm a follower!
I also blogged http://debzbookshelf.blogspot.com/2011/09/guess-what.html

Yippee and Congrats! I'm so excited to get my grubby paws on Slayers!!

I have commented.
I have followed.(aka stalked)
I have Facebooked.

I'm a follower, and I posted this on one of my blogs.