Sometimes fans give me things. I'm always appreciative. I have a really cool apron, a framed picture of a stone angel, and a Barbie doll made to look like Chrissy that reader friends have given me. This is a perk I never expected when I first started writing, and I always find a special place in the house for such gifts. But lately I got a gift that I'm not sure where to put.

Let me explain. It started with an email conversation my writing friend, Angela Fox, and I were having. She said, "I don't give a rat's tush* what So-N-So** thinks."

I wrote back to her, "Well, it's a good thing you don't give a rat's tush what So-N-So thinks, because I clearly remember you promising me all of your rats' tushes."

Sometimes I am witty in my emails like that.

But Angela is always wittier, because at the book launch she showed up and gave me plastic rats all through the event. Some of them were as big as chihuahuas and had scary red eyes. I laughed a lot. People probably thought Angela and I were a little strange, which strictly speaking is true.

I brought the rats home and tried to find a place for them. I must admit I'm having trouble finding the right spot. At first I tried one of the doll cases. (I have three.) 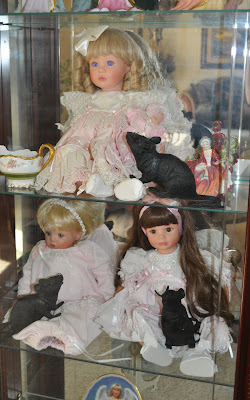 It didn't seem to be a good match. So then I tried the coffee table. 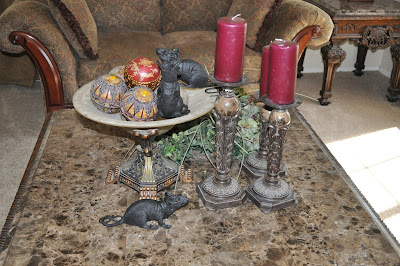 But I thought visitors might not appreciate the rat motif. So then I tried upstairs by the reading angel which sits next to one of the bookcases. (I have eight--but that's not a sign of hoarding because I'm a writer.) 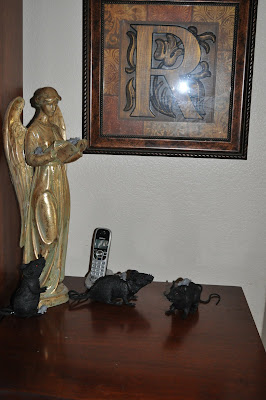 Here you can see some of the smaller rats. They're gray. Knowing that this surface is frequently engulfed in clutter (which is normal because I have five children, and so is not a sign of hoarding tendencies either) I decided to try the rats in my room.
Here they are on my dresser. 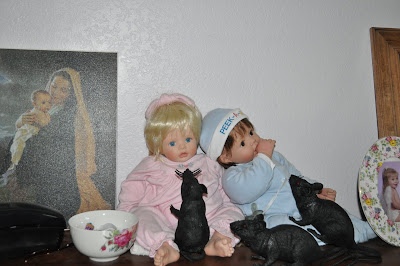 As you can see, they didn't work here either. My dolls look distinctly creeped out by the rats. (And yes, even though I have three doll cases, I still can't fit all my dolls into them, which actually may be a symptom of hoarding, but we aren't going to talk about that.)
So, while I try to find a place for the rats, my friendly little dog is doing everything she can to welcome the new editions. 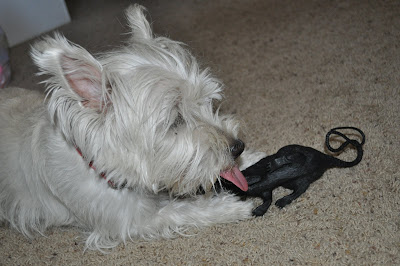 Email ThisBlogThis!Share to TwitterShare to FacebookShare to Pinterest
Labels: What do you do with your rats? And who would you give a rat's tush about?

I love how they look with the dolls...you're lucky I didn't just cut the backsides off and make a bouquet out of them. There were **cough!** others in my fam that encouraged me to do so. Although, then they could have been a centerpiece for your table.

We think the dog is cute, which is a good thing since no one would ever love her for her brains.

Ha! They totally should make bouquets out of them. I happen to be a florist and could do this. I can't remember the oddest thing I've ever put into an arrangement...I must have blocked it out.

I think florists should start making these. I would send a few and sign them with Angela's name.

The doll pic looks like a scene from a horror movie!
What about for your next party you arrange them on the cheese platter?
:)

Awesome idea! I'm totally going to do that. (This may be why not many people come to my house for dinner.)

I saw this when you first posted it but have been too busy having nightmares to comment. Thanks a lot.