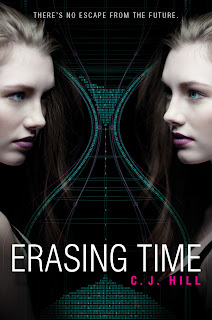 Hey, it's nearly Erasing Time time! My next novel comes out August 28th. In honor of the countdown, I'm giving away my one and only ARC of the book. (Which means I'll be combining entries from both the CJ Hill and Janette Rallison blogs)


In this high-action and romantic futuristic adventure, there is no escape from the future for two contemporary girls pulled out of their own time.

When twins Sheridan and Taylor wake up 400 years in the future, they find a changed world: domed cities, no animals, and a language that’s so different, it barely sounds like English. And the worst news: They can’t go back home.

The twenty-fifth-century government transported the girls to their city hoping to find a famous scientist to help perfect a devastating new weapon. The moblike Dakine fights against the government, and somehow Taylor and Sheridan find themselves in the middle. The only way to elude them all is to trust Echo, a guy with secrets of his own. The trio must put their faith in the unknown to make a harrowing escape into the wilds beyond the city.

Full of adrenaline-injected chases and heartbreaking confessions, Erasing Time explores the strength of the bonds between twins, the risks and rewards of trust, and the hard road to finding the courage to fight for what you believe in

For a chance to win, leave a comment telling me what you think America will be like in 400 years.
Followers of one blog will be given and extra chance.  Followers of both blogs will get two--so let me know in your comment if you follow one or both.

And as an extra teaser, here's the first page or so of the book. (Sorry I couldn't format it to look like a book page. If anyone knows how to do that, let me know.)

It was as good a day as any to plan treason.

Echo’s hands moved over the computer control panels in a quick rhythm until an aerial picture of Traventon appeared on the screen.  He enlarged the wilderness that bordered the domed city, searching for any sign of a path. In order to escape from the city, he needed to find a safe route; the route others took when they fled.
The date code on the picture said it was eighteen years old. From before the war with Chicago.  Had the area changed since then?  It might have.

If Echo could find the encoded site where the government kept recent pictures, he could splice into it. But that could be dangerous. It was illegal to do unauthorized searches.  The Information Department kept track of the government sites, and the more important the data was, the harder it was to search it undetected. No point in taking risks he didn’t have to. People had been given memory washes for less. Anyway, a recent picture might not help him any more than this one.  People had been escaping from the city for decades, so if a trail existed, he might be able to see it in this picture too.

A massive forest spread out to the east of the city, greener next to the river that supplied their water.  Toward the west, the vegetation became sparse and was interspersed with brown and gray rock.  The deep shadows indicated height, although whether they showed hills or mountains, Echo couldn’t tell.  To the north of the dome was the scattered wreckage of the old city: Denver, destroyed in the raids of the twenty-third century.  When Echo was a baby, his father had gone there with an archeological team to rummage through the rubble for artifacts.  But that had been nearly two decades ago, before the vikers became such a danger.  Now the wilderness was so infected with the criminal bands that no one was allowed outside the city walls unless they had a good reason and a strong weapon.

Echo had a laser box hidden in a false compartment in his closet.  It was one more secret, one more danger that he wouldn’t have thought himself capable of a few months ago.

He went back to studying the photo and the dome that had always been his home.  He didn’t want to leave his father, his friends—everything—but if he stayed, the Dakine would kill him.  He only had weeks, days maybe before assassins came for him.  The secret society didn’t waste time on trails or the sort of bureaucracy that made the government so slow.  They just hunted you down.

Echo rotated the picture on the computer screen, hoping a different perspective would show him something; some clue as to which way people went when they left Traventon.  The most logical route was along the river.  It would provide travelers water if they had disinfectors with them.

Echo zoomed in on the river.  He didn’t have a disinfector, but he had another advantage. He had access to historical documents.  He knew that before disinfectors, people boiled water to make it safe. It had been easy enough for him to compile a solar powered heat coil.

The best direction to go would be south.  It was warmer.  He’d gleaned this fact from historical documents too. Stories he’d read about cowboys riding across dry dusty lands and women who sat in the shade fanning themselves.  There was also something called cactus, which were sharp and painful, but not fast moving, so he ought to be able to avoid those.

Whether any of the southern cities would risk taking him in, was another matter.  He had computer skills worth paying for, but no way to convince anyone he wasn’t a spy.

The door to the Wordlab slid open, drawing Echo’s attention away from the computer.  He expected to see one of the wordsmiths coming in, but two black-clad Enforcers strode into the room instead.

Echo’s hands jerked to a stop on the control panel. It was treason to try to leave the city, and he had an aerial picture of Traventon on his computer, the dome of the city in full view. Would it look too suspicious to close out the screen, or was it better to make up an excuse—pretend he was doing some sort of authorized research?

He sat frozen in his chair, undecided, caught in his own panic.  The Enforcers walked toward him, their faces barely visible through their helmet shields.  It was impossible to read their expressions. Did they already know?  Just before the men reached his desk, Echo ran his fingers over the keyboard. It wasn’t subtle, but the photo of Traventon disappeared from his screen.

He put on a disinterested expression.

“Echo Monterro?” one of the men asked.

“We’re here to escort you to the Scicenter.  Jeth’s request.”

So they didn’t know what he’d been researching, hadn’t been tracking his activities.  Echo relaxed in his chair. “Why does my father want me at the Scicenter?”

The man simply motioned toward the door.

Echo didn’t ask for more information.  It wasn’t wise to question Enforcers.  He stood and walked awkwardly between them to the door.

I think that with the way technology and the government are going, they are going to find some creepy way to control everyone. Like, have you ever read that short story called Harrison Bergeron by Kurt Vonnegut? I think it'll be like that. Which is definitely very disturbing!

I follow both blogs and would really love to win the ARC!!!!

Thank you so much!!!

[I didn't know if you wanted me to comment on both your blogs. So don't be surprised if there's some Déjà vu going on here. :)]

At the rate our government is going, we are going to be in the book Matched in 400 years!

I am so excited to read Erasing Time!

I am a follower of both blogs too=)

In 400 years? Wow that's a long time. I think the technology will be so advanced I can't even guess. I hope there will be hover cars that drive for us. That would be awesome.

I'm a follower of both blogs.

Unfortunately I think there will be much more government control, little free enterprise, and TONS more technology.

Excited for the book!

I follow both yours, and Janette's blog as a GFC follower under the name Taz.

I think America will be like Big Brother, have you ever seen the show? There will be millions of cameras all monitoring you and your behaviour and making sure that you're not stepping out of line, and if you do..well then the government will make you disappear. Ok this actually sounds more like a dystopian novel but oh well lol. Thanks for the giveaway!

I follow both blogs, but I also think that there will be plenty of people who don't live in Zion and could be afraid of it.

New follower of this blog.
I think society will be genderless with reproduction limited to cloning.
Very excited for the new book!

I follow both of your blog! My GFC name is Hilda. Hopefully the giveaway is international! x)

I think America may turn into something near Dystopian stories. Maybe there are still animals and natural resources. But since we keep wasting them, the resources are rare and people would fight for it. Well, I just wish my vision won't come true! x(

Thank you for the amazing giveaway! :)

There's this quote I love: "Any sufficiently advanced technology is indistinguishable from magic" (Arthur C. Clarke). So I think 400 years from now, everything will look like magic.

Oh, and whoops! I forgot to mention that I follow both blogs.

I think the world is going to have amazing robots that do everything for us!

And this giveaway is my dream come true! Your books are very much loved by myself and my kids in my house!!

Let's see if a miracle happens and I can win!

America in 400 years will be filled with a much more sophisticated society than that of today. Life will be much simpler with the advanced technology.

Follower of both blogs!!
Gracias for the giveaway

I think that there will be lots of technological advancements such as robots and flying cars. And maybe a little world peace thrown in there. After WWIII, of course!

I follow both blogs!
And I'm dying to win this giveaway!!!

It is hard to imagine what the world will be like in 400 years. Wouldn't it be nice if the advances in technology will have worked for the good of mankind, and most diseases are eradicated? Faster, safer transportation would be great too (kind of Willy Wonka Wonkavision/Star Trek like).

I follow both blogs, and would love to win the ARC.

Like I posted on your other blog...I think it'll go between two extremes:

Again...pushing for option A...but thinking B is closer to the outcome.

Yea now I follow both blogs. I also moved and had a talking to to my new library since the only had three of your books! In the whole city!

This book loos great. I havent seen all of your blog yet but when is the next Slayers book coming out. I got all of my friends reading it and everyone wants to know when it comes out!

P.S. I follow both of your blogs. Sierra
Keep Growing Beautiful!